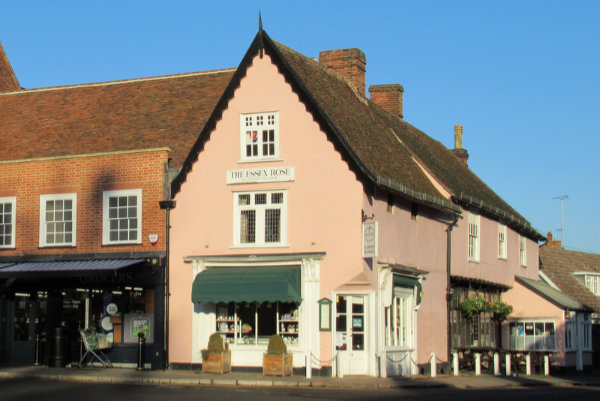 The 16th Century Essex Rose Tea Room is open seven  days a week, every day of the year except over the Christmas period. It remains popular with locals and  visitors alike. Wilkin & Sons Limited are active in supporting  the village activities when they can. They welcome the Dedham Lunch Club, run by the church   pastoral team for elderly Dedham residents on the first Monday of the month. Until recently, they provided a Christmas party for some of their regular local customers.

The Essex Rose Team Room offers traditional table service in warm, comfortable, and well-lit rooms overlooking Royal Square and St Mary’s church in the centre of the village. The Manageress, Sarah and her team are very welcoming and serve a range of sandwiches, hot and cold snacks, jacket potatoes, cooked lunches. The tea room also offers the popular cream teas and cakes made by the Tiptree Patisserie.

The special: a traditional English Afternoon Tea for two. It is served on a three tier cake stand with freshly made sandwiches of your choice, homemade fruit scones, Tiptree Little Scarlet Strawberry conserve and Rodda’s classic cornish clotted cream and finished with a selection of miniature individual patisserie items.

The Wilkin family have been making jam and preserves since 1885.  They grow a range of traditional English fruits which are carefully inspected for quality, then cooked in small batches in the traditional copper-bottomed pans as they have always been. The Cafe sells an extensive range of Tiptree jams and other produce, including gift selections.

The Essex Rose Tea Room started life as half of a private house, with its current neighbour The East of England Coop building being the other half.  It was built in the 15th Century at the time the cloth trade was flourishing in Dedham. With the demise of the cloth trade the house was split into two parts supporting different business enterprises.

The fine timber framed building, known originally as The Corner House, housed a number of businesses over the years, including a saddlery, a stationer and a hardware shop. By the early part of the last century it became The Corner House Café.  The café was run by a Miss Loe and later by Mr and Mrs Davies, who it is believed changed the name to the Essex Rose Tea Room.

In the late 1960s Del Bower visited the tearooms when taking his mother out for afternoon tea. He saw the business opportunity in a prime position in the thriving village of Dedham.  Del and his wife Peggy, who had some experience of running a tea room in Kent, bought the business in 1971. They moved into the apartment over the café with their two children, David and Mandy. They set about modernising the premises and putting their own stamp on the business.

They introduced light lunches as well as increasing the range of homemade cakes and scones on sale throughout the day. They increased the seating and also sold a range of art and craft items with a historical link to local artists, such at canvas backed prints of Constable paintings. These gifts were very popular mementoes of a visit to the village and the Essex Rose.

Also, they started a chocolatiers counter with 25 varieties of chocolates and other top-class brands. An ice-cream parlour, with easy street access, also proved very popular with visitors to the village.

The business was very much a family concern and Del, Peggy and  Mandy became well known in the village. For many years, Del had three generations of some families working in the Café especially during the busy season. Many current residents fondly remember their time spent working in the Essex Rose. The staff enjoyed tea  together at the end of the day and at special times of the year they would dress up and take part in village festivals and events.

During the 70s and 80s the village High Street shops were thriving;   parking time was unlimited and Dedham was promoted as a place to visit. Visitors came from the local area as well as from further afield.   It was a favourite destination for many coach companies. A village  association was formed and Del became the Chairman. He was also  Chairman of Premises at the time the new school was built and also  was active in the fund raising for the Dedham Health Centre which is now part of the Ardleigh surgery.

He and Peggy retired when the business was sold to Wilkin and Sons Ltd. of Tiptree. The Wilkin family have been farming in Tiptree since 1757. The Essex Rose became part of their expanding Tiptree tearoom business.

The village centre now has a two-hour parking restriction, just long enough for afternoon tea, coffee and a cake, or lunch. The Mill Lane car park is very reasonably priced and is in easy walking distance.

The Essex Rose is very busy during the summer holiday period and large parties are advised to book ahead.